Production is equal to reproduction, but trying to improve the reproductive efficiency of a cow, sheep and goat herd by genetic selection is slow and difficult. However there are various types of test that can be perform to help maximize the days of non-production, but producers must be sure that the test they are using is accurate and can give 90-100% production rate. Triple-Preg Diagnostic is manufactured to ease producers concern on how to increase the rate of their production, this test can be used in four samples (Milk, Saliva, Blood and Urine). These test can detect ovulation at early stage and can give proper care to cows, sheep and goat by learning the estrus cycle.

Milk: In order to get reliable result, give up the first three milking and then collect sample milk around 5ml take 1ml in the test tube, placed the centrifuge 10,000 rpm for 10 minutes, in vitro milk was divided into 3 layers, use the micropipette and isolate the 2nd layer of the in-vitro milk sample.

Saliva: Collect 5ml Saliva from the mouth, centrifuge at 1500-2000 rpm for 5 minutes, take the supernatant (2nd layer of the in-vitro saliva sample).

1. Take out the test cassette and milk dropper from the foil pouch.

2. Use dropper to withdraw sample from the specimen cup and dispense 3-4 drops into the circular sample well of the test cassette.

Positive: If both C and T lines are visible, the test result is POSITIVE, which means the cow is pregnant or in the middle period of estrous cycle.

Negative: If only C band is visible, the test result is Negative, which means the cow is not pregnant.

Invalid: When control band does not appear on the result window, the test is invalid. Improper test procedure or deterioration of reagents is the reason for invalid result, so we recommend to repeat the test with other test cassette.

1. Strictly test according to the law of the estrous cycle.

2. Don’t keep the test cassette unpack in the air for a long time, always keep sealed when test devise isn’t in use.

3. Make sure to drop milk sample into the circular sample well according to the instruction.

4. Do not use test cassette after expiry date and do not mix with different lot number.

5. For single use only; do not re-use the test device. 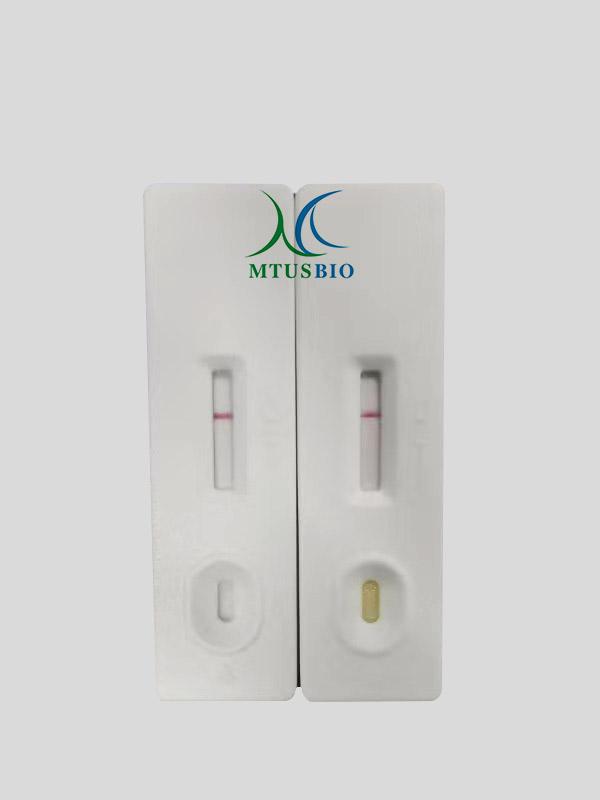